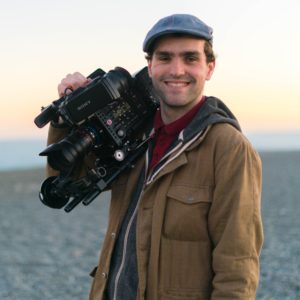 As part of Autism Awareness and Acceptance Month, we will publishing a few profiles of people in the autistic and wider autism community.

Our first profile is Ricky Townsend, an award-winning filmmaker from Christchurch. He is a fine arts student, specialising in film, at the Ilam School of Fine Arts, University of Canterbury.
He is also pursuing an arts degree in Philosophy. He is currently working on a feature-length film.
He answered a few questions for us:
What is the latest project you have been working on?

I’m currently in post-production for a Sci-Fi feature film, TRUTH.EXE, we spent up to three years filming. Based on our short film (of the same name) back in 2019. The work is inspired by the philosophy of Nick Bostrom and David Chalmers, exploring the defining of reality and finding transcendence in a scientific world. The film is influenced from the plot puzzles you see in the works of Nolan or Richard Kelly and the aesthetics of the neo-noir.

A quick premise of the film:

Alice Wonder grieves over the loss of her brother, but nobody knows he ever existed. Alice searches for answers, witnessing the story of a supernatural photographer and the film crew of a cursed documentary.

How does your neurodivergence inform the work you do?
My neurodivergence makes me quite an analytical and detail focused thinker. I was very commonly in environments where that would be considered the antithesis of being creative. So, I really had to push against that perception and embrace analytical creativity and expression. Being detail focused, especially in film, is pivotal to the cinematic experience. Even if you don’t consciously notice all the details you see in a work (whether that’s design, plot, VFX, text, cinematography) it all adds to the cinematic experience. I do believe there is a sincere (even emotional) value in analytical storytelling which is what my brain pulls me towards.

My neurodivergent brain also allows me to really step into a world and be fully immersed in it; it allows me to fall in love with what I create. I am perhaps more in tune with my cinematic worlds then I am with the real one haha. I really believe being immersed in your world and understanding it deeply is pivotal in bringing it to life; but also finding meaning in it.

When did you realise that you were autistic?
I was diagnosed at the age of three, but I found out at some point when I was in primary school. I always knew I could never quite fit in with the outside world. I was more than happy to stay in my fictional worlds of comics and writing (which now I suppose is my filmmaking). Other kids would treat me as the odd one out. Some would go so far as to say to my face I had ‘mental problems’. Though things got better in high school.

Autism is one of those things where once you think you understand it, there’s a whole lot more to it than you realise. Being autistic isn’t just some ‘quirky’ fact about yourself, it is ingrained in you. There are ways in which my autism affects me in adult life that I would have never conceived of, or prepared for, as a kid. So, in a sense, I must continually re-realise it.

What is some of the advice you have for young autistic filmmakers who are inspired by the work you do or thinking of pursuing a creative path like you have?
I think what’s made filmmaking work for me so far is that it’s my hyper-focus, I have a natural drive and dedication for it. So, the thing I’d have to say to young autistic people is don’t push against your hyper-focus. Embrace your hyper-focus, find meaning in it and develop with it; whatever it is.
Film is a medium that requires dedication and creative drive, you need to have a story you want to tell with purpose and be willing to work on that one idea for up to a year, potentially several years. So, if film is your hyper-focus, my advice would be to find a larger purpose to that goal. Is there a story you’re passionate about you just need to bring to the screen? And embrace the chance to learn and develop in your making.

Also embrace the collaborative side of filmmaking. There is something rewarding about being able to share your internal creative worlds and ideas with the people you make films with. For me, it was a great way to open up from my internal world and be part of a community.

What are some of your long-term goals in filmmaking?
My first goal is to finish our Sci-Fi feature film and work to get it through film festivals. But beyond that, I want to keep working on future projects (feature films, shorts, music videos) and build on my career from there. I’m especially keen to reach out to groups and organizations who fund for short film/feature New Zealand projects. But from there I plan to see where the winds of career take me.
It is Autism Awareness month, so what message do you think it is important for people to know about the autistic community?
Everyone in the autistic community is unique and has a different relationship with their autism. Because autism has no ‘look’, it makes us susceptible to being misunderstood by others and disconnected. No one sees someone who is autistic, they instead see someone who they think is distant, or introverted, or arrogant, or unemotional, or unempathetic. Even if you know someone who is autistic it doesn’t follow that you therefore understand autism. The thing I’d say is, don’t assume you know our thinking and intentions; especially since we tend to think in very different ways to Neurotypicals. The best thing to do (in my view) is ask us and talk to us.

More about Ricky: His early work won the Overall Secondary Student Award for the 2016 ‘New Zealand Young Filmmakers Competition’ and the Secondary School Runner Up Award for the 2016 ‘FocusOnAbility Short Film Festival’. Ricky also directed the comedic ‘How To Bus’ social etiquette video with Metro Canterbury.

Ricky’s short film on autism, ‘Mr. Savant’, was also one of 10 winning films in The Outlook for Someday 2019 Film Challenge.

You can find out more about Ricky here: https://www.facebook.com/rickyTnz/

Wellington man with autism is on the frontline as essential worker