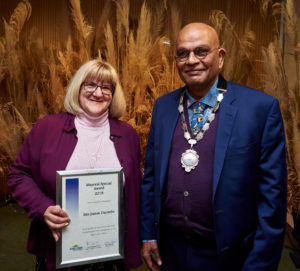 Our third Autism Month profile is about Joanne Dacombe.
Joanne was diagnosed as autistic later in life and is the mother to an autistic adult son. This gives her familiarity with many issues around autism and lived experience as the parent of an autistic person.
Joanne is currently a member of Autism NZ’s board. She spent 21 years working for the Reserve Bank of New Zealand in the area of monetary policy. In more recent years she has worked part-time in office admin for a primary school before moving on to work more in the disability sector as an advocate and consultant in several roles including working with the Ministry of Health Disability Support Services Consumer Consortium, the Ministry of Social Development, and the Ministry of Education. She advocates as part of disability led organisations while also recognising the role many whānau have, particularly in advocating for their children.
Joanne answered a few questions for us:
When did you realise you were neurodivergent? How was the diagnosis process for you and how did it change your life?

I did not realise I was Autistic or neurodivergent until 2011 following a mental health breakdown resulting in major depression. I’ve since discovered it happens this way a lot for some Autistics. It was a bit of a shock initially because I had only viewed Autism from my son’s perspective and my Autism has differences. For that year (Aug 2011-Aug 2012) I was self-diagnosed – identifying as Autistic but not formally diagnosed. Because I didn’t have any diagnosis I felt that I did not fit in anywhere, I wasn’t confident about advocating for Autism outside of a parent perspective, and I really wanted to know if I was Autistic or whether there was some other form of neurodivergence so I decided to pursue a formal diagnosis. I decided against the public system for several reasons: our local mental health unit had a psychiatrist who was fond of saying “I don’t believe in a diagnosis but on managing behaviours”, and there were long wait times which were often longer for adults. Some DHBs even capped the numbers of Autism diagnoses in their areas. As a result, I made the decision to go down the private route and this meant saving which is why I spent a year not being diagnosed – stuck in limbo. I was lucky because back in 2012 there was a clinic offering diagnosis of Autism and ADHD in Wellington. I still remember the diagnostician – Dr Paul Taylor, who has since passed away from cancer, and who spoke at one of the Autism NZ conferences. It was a relatively short wait list – 8 weeks from when I made the appointment. I remember more about the room we met in than the soft-spoken man who gave me the diagnosis of Autism, Level 1.

I do remember he disliked the term disorder that often accompanies a formal diagnosis. He understood that Autism was not a disorder, despite the challenges it may present, but rather a condition because it reflected a different way of being, of thinking. Receiving the diagnosis was numbing at first, it took a bit to absorb despite already suspecting my being Autistic. There was a period of grief – coming to terms with what might have been if I’d only known earlier.
Then it became a period of reflection – what did I want to do with this new-found knowledge, if anything? It became a life changing moment because I realised I wanted to make a difference for other Autistics, for other families with Autistics, and to shape some thinking around Autism in a wider sense in the community and within organisations. At first, I wanted to tell everyone – but I soon learned that many can be dismissive (“you must be so high functioning”), many felt sorry for me (“I’m sorry to hear that”), and some ignored the diagnosis.

I had to discover new ways of navigating the world and being kind to myself, taking the pressure off masking and fitting in though I still do this a lot. It led to a lot of thinking about ableism – how disabled people are thought of and treated and the lack of presuming competence.

Tell us a bit about your work history – and in particular within the autism sector?

Prior to working in the Autism/Disability sector I worked for the Reserve Bank.
I left working there following my son’s suspected diagnosis of Autism (at that stage) so I could better meet his needs – I was very conscious that you only get one chance to build a child up, to set them up well for the future. Then, following my own diagnosis, I realised that I could advocate for making changes in the “Autism sector”. I started small by creating an Autism page on Facebook which I used to share my thoughts, create graphics, share articles and memes by others. I was beginning to want more but had no idea where to start and that’s where timing is everything because right about this time Autism New Zealand took on a new Chief Executive – Dane Dougan. He asked me to get involved with an Autism NZ conference. I saw this as an opportunity to make a difference within and I was mindful that I had once thought of myself as just a parent of an Autistic. I came to find acceptance and understanding within that organisation. I was given a voice and my views were listened to as I listened to others as well – both Autistics and parents. As time went on my confidence grew and so did the work around not only Autism but disability generally.
I have seen many changes around Autism in particular:
*in the language used to talk about us,
*in society’s acceptance around Autism – recognising it has a way to go,
*in Autistics finding their ‘voice’ and speaking up in whatever form they need,
*in organisations (not just Autism ones) recognising the contribution we can make around the Autism/neurodiversity discussions so we can contribute and are included,
*in Autistic researchers contributing to research about us.
But the work is far from over and it’s exciting to see younger Autistics making their mark on society’s perceptions around Autism.
How has your autism been an advantage in the work you do?
I mentioned I used to work at the Reserve Bank. My autism was a useful advantage in my work there because I loved working with numbers and patterns and the attention to detail that was required. Hyperfocus was also an advantage to working out systems, finding errors, working through number problems. Being Autistic in the Autism sector is a huge advantage because I often understand the struggles Autistics are experiencing because I have had them myself. Being methodical and remembering all sorts of things many people would forget has been a strength in many aspects of my working life. If I say I am going to do something, then people know I will follow through and do that – to the best of my ability. I guess to some extent I have hyperfocused on Autism and that’s been an advantage in the Autism sector because I’m not distracted away from that task.
You also have an autistic son. What is some advice you have for other parents of autistic children?
What I wish I had known back then as my child is now an adult!
So much advice but I will start with this – “don’t sweat the small stuff”, I wasted too much time worrying about the small stuff as well as the big stuff. I would have saved myself a lot of grief and anxiety.
* Parents need to get a thick skin because they will face many horrible comments from either parents, the education system, doctors, their child’s peers, their non-Autistic child’s peers, and more. There is still a lot of parent-blaming in society. Try and build up a support network for yourself – other parents of Autistic children can be a good place to start as well as the outreach coordinator services through Autism NZ. I thought my child wasn’t “bad enough” to need Autism NZ’s services but they would have made a difference.
* Parents need to look at their child’s environment – understand it from the Autistic child’s perspective – is it too noisy, too bright, too much, too long, and so on. Have strategies (sunglasses, noise cancelling headphones etc).
* Take the time to get educated on Autism rather than winging it. There are some great programmes out there to get you started (Autism NZ has some great ones) and there are some great resources and books nowadays with Autistic input.
* I wish I had advocated more for my son in the classroom – to help his teachers and more importantly his peers, understand Autism. There’s a big gap there. We still spend too much time trying to get our Autistic children to fit in instead of helping others understand them.
* Find what your child loves and build on it (strength-based approach) – it could be a future career one day. I loved economics and it led to my working at the Reserve Bank. I speak from experience.
* Find what helps your child to reset – often water play, trampolines, quiet spaces etc.
* Keep known stress triggers short wherever possible (e.g., shopping).
The list is endless, but I’ve come to realise that being a parent of an Autistic child doesn’t stop when they are an adult and that is okay. It’s a privilege that I don’t take for granted and I recognise that I am still a parent of a non-Autistic adult too, just the advocacy and needs are different.
It is Autism Awareness month, so what message do you think it is important for people to know about the autistic community?

We need people to be more than aware of Autism – we need them to understand what being Autistic might mean for the individual person. Awareness is only a steppingstone.

We need society to make the effort to know and understand Autistics and not label everything we do or say in a pathological way. For example, lining up toys is often labelled inappropriate play yet it’s actually about creating order and that isn’t inappropriate – just different.
Don’t shut us out – out of schools, out of employment, out of being able to contribute to society.
The Autistic community is just like any other community – we want to be included, we want to feel welcome, we want to contribute where we can, we want to be respected, and we want to belong. We can do so much but we need people to walk alongside us, supporting us in those efforts and helping us to find our own way.

Wellington man with autism is on the frontline as essential worker